A new excibition at the museum. Ashes inside an urn houses an ancient, evil spirit.

Will the spirit be defeated or manage to escape?

The entire game (Graphics, original music/SFX, code - the whole cake) was made from scratch in 48 hours.

Art and code by Fredrik Edman and Ulf Malmberg

For the best playing experience, please download the .EXE

Your objective is to collect all cursed amulets, then make your way back with them to the pentagram in the stage center. Guard will hunt you if the see you, make sure to hide in a painting or set of armour if that happens!

Hard game, but fun! Awesome music and very good art! Really stressful when the guards sees you xD especially if it's through a wall and you have only one opening to escape from. If you decide to polish the game after the gamejam then plox add in the intro normal and hard level to choose between! :D

Thank you for playing! The guards aren't supposed to see you through walls, but they can hear you if you run or attack - or if you trigger an alarm! ;)

Actually, the guards can't hear you running any longer (they could during parts of development), I had to remove that feature just before deadline because it was still too buggy  :P

Then I withdraw what I said! :P

I absolutely adore the art for this game! Also the theme was executed in a very good way! Now, I do have some criticism... Firstly, the game is hard. VERY HARD. But it sometimes feels a little bit unfair, since you sometimes get seen by guards, that are outside of your own vision and therefore not really avoidable. I think the game would benefit from some kind of visual indicator of the guards. Also, I personally took 2 attempts to notice I could hide in objects, so I think a little tooltip at the beginning would be quite helpful to new players (As well as an Indicator in which objects you are able to hide in, as i found myself dashing into obstacles thinking they were "enterable" quite often).

That probably sounded far more harsh than I intended, I really could see this game as one of the jams winners! Keep up the good work!

Harsh maybe, but in no way unfair :P I agree with your criticism 100% (and I am the programmer and level designer, so it's all my fault anyway). Sadly, we ran into problems on Saturday, so I had to rewrite most of the program. And that caused play testing to be minimal (at best) and we didn't have time to implement all features we wanted. :P

God, i feel this situation... I had my game for this jam almost finished, fucked something up 2 hours before the deadline... Yep it was kinda sad.

ooooooh this is a very difficult game but it's so vaguely scary!!!! well done, wow

Thank for playing it and commenting! We know for a fact it's possible to beat the game, but it is indeed hard! ;)

Nice idea!
Something that can be improved is the ease of restarting the game. This is a hard game and it takes about 15 seconds to restart the game currently.

You are very right about that :P Sadly we only added the intro and title screen when there were like 10 minutes left of the jam, so we never had a chance to realize it was a problem and fix it :( 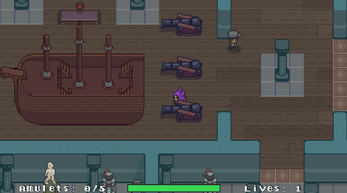 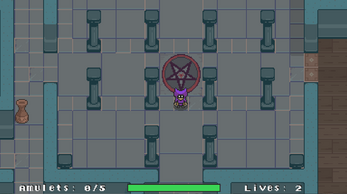